I’ve always wanted a flat-tanker but never been able to afford one. The other year I saw one of those new Black Douglas Sterling flatties and realised I couldn’t afford one of those either! This led me to the only conclusion. I had to build one myself. Luckily I had a donor bike which could only ever be improved, no matter what I did, in the form of a Chinese AJS js125e. My son Harry had moved on to cars and gave me his university run around to play doctor with.
The fuel tank is the centre piece of the bike so I modelled some ideas in 3D CAD and eventually came up with something that looked appropriate. Brother Albert agreed and construction began. I made a buck out of laminated MDF then cut, shaped, sanded and rounded over the edges until it looked like a big MDF tank! Next using loads of heat a steel skirt was wrapped around the buck and the rounds delicately formed with mapp gas and a big hammer. A larger sheet of steel was then heated and bent to form the top, back fold and base of the tank. After I’d tacked it in place Albert welded it all up with Steve Fairchild’s MIG welder.
Using more MDF I made a buck for the tunnel and with the help of Albert again it was soon manufactured and welded into the main tank. This meant that the backbone of the frame was hidden and also maintained the structural integrity of the bike. With the addition of a fuel filler neck, tap insert and mounting points the structure was complete.
With no respect whatsoever the back end of the frame was cut off as was anything else I saw no purpose for. Mounting bars for the basket and mudguards were welded on and the rolling chassis started to take shape. The engine was then removed and sprayed black and a mixture of Tekaloid and Hycote was used for the frame, guards and wheels. The tank was hand sprayed with Tekaloid 318 rattle cans and vinyl gold pinstripes placed on both sides. The finishing touch was the home-made decals and Tekaloid clear coat.
The build is now complete and everything is working fine. There was a mass of wiring to sort out as everything is plumbed to the basket. The problem is that being post 1986 all electrical components originally fitted has to work! The wiring procedure itself however was fairly simple as everything meets up in the basket instead of part of the loom going here and a bit there so it was a case of join the colours, fingers crossed; don’t cut the blue wire Chris!
I don’t claim to have built a classic bike, it is a custom bike but in a classic style fitted with modern features and hopefully a lot of fun to ride. Perhaps it’s something the Chinese AJS company should have considered?
Big thanks to Brother Albert, Steve Fairchild and Geoff “The Black Prince” for help throughout this project. Krishna’s blessings on you all. Stay safe and build something for fun!
Chris

What an excellent and imaginative project and a lot more desirable than the original bike. Well done Chris it’s a cracker. BW

The latest thing to occupy me has been working on my 350 Honds K4 I’ve had it some years now sitting in my shed, but about four years ago I loaned it to my son Andrew to bob about on. He has since bought a KTM to use so I managed to get it back. Andrew races a K4 and had converted this one into a cafe racer, so I needed to change it to make it more rideable for myself, especially after my stroke. Ihave fitted standard footrests on the bike ,and taken off the rearsets, also I’ve put handlebar risers and Norton straight handlebars instead of the clip-ons. The next thing was a decent seat and tank. The seat  I had in stock after acquiring it a couple of years ago at a bring and buy sale. The tank was another matter, its been sitting in a cold damp shed for years and had been brush painted with a mop, I think. All in all the paintwork was terrible and it was rusty as hell inside. A friend had a good one but lives in Wales and because of the current lockdown I cant leave and were not allowed in Wales. I do have another tank but it could do with a repaint and again derusting. I’ve decided I can wait a few weeks longer for restrictions to lift because I dont think there will be much of an opportunity for riding this year anyway. Alex 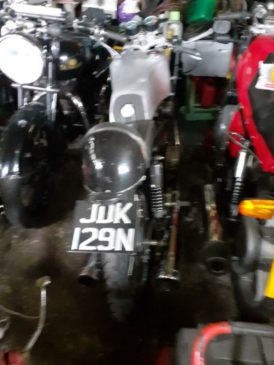 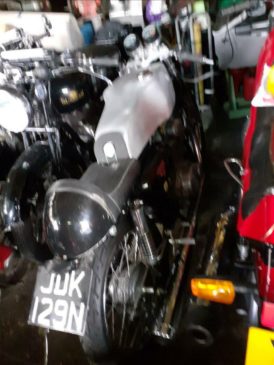 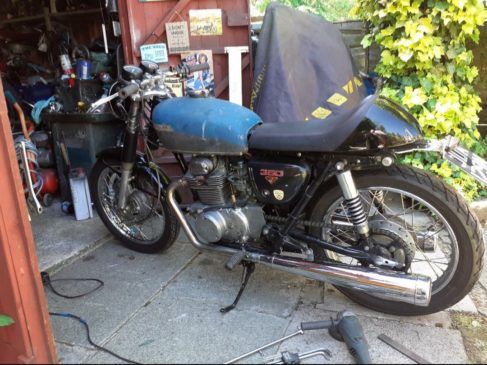 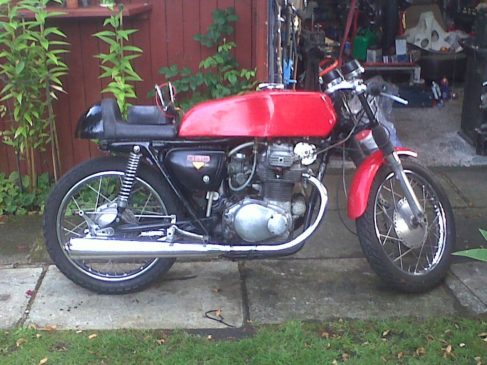 Don’t forget we need your projects:

I’m sure other members are just as occupied so let us know what you’ve been up to during the lockdown and we’ll include it in the next newsletter. Without your projects we have no newsletter. Alex