The North West branch of the VMCC has a new member Gordon Williams thanks to his brother and long standing VMCC member Brian Williams.

Brian has previously been lauded (January VMCC Journal) for encouraging 2 ½ year old Grandson to become interested in motorcycles. However, in Gordon’s case he worked at the opposite end of the age scale to rekindle his lapsed involvement with motorcycling.

Gordon had neither owned nor ridden a motorbike since April 1973 when he moved to London and passed on his beloved Rickman 8 valve, to his brother Robert. The Triton built in 1969/70 is now owned by Brian who competes on it at various classic sprints and hill climbs (see Fig.1). This includes the Hoghton Hill Climb / Sprint this Sunday 7 April 2019. 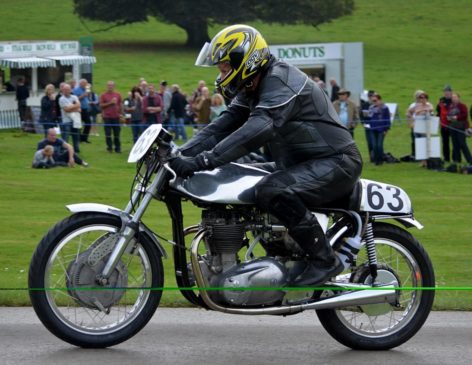 It’s taken a while (many years) for Brian to work his magic on Gordon until in August 2018 he succumbed and purchased a 1968 Triumph T100C on eBay (see Fig. 2). There followed a course of refresher riding lessons (Hen and Chickens Rider Training at ALMAXX Prescot Road, Melling, Liverpool, L31 1AN Tel: 0151 520 0026 almaxxmotorcycles.co.uk/). A sensible approach given the 45+ year gap since he last rode.

The bike underwent some minor tidying up of electrics including fitting indicators. Gordon had mixed feeling about this. On the one hand purists will see it as sacrilege. However, Gordon intends to ride the bike rather than put it in a glass case. Given the nature of current driving on UK roads he opted for the precaution of adding indicators to ensure his intentions are clearly seen by other road users.

The Triumph is now on the road and Gordon has used it to attend several VMCC bike outings and intends to use it to attend the 2019 Classic TT in the IOM. 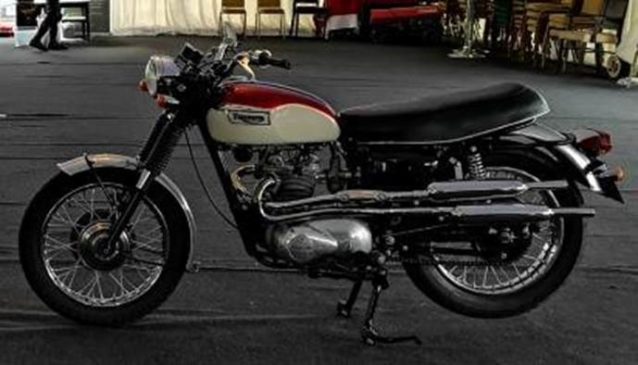 Not satisfied with his work, Brian has since encouraged Gordon to take on a “PROJECT”.

This culminated during February this year in Gordon buying the bare bones of a project to build another Triton exactly 50 years after he built his last bike. Much of the purchase will not be used (see Fig. 3) as they do not match his aspirations for what he hopes will be worthy of the Triton Heritage. Additional acquisitions for the project have included a “Triples Rule” aluminium 750 conversion, Twin leading shoe hub & brake. Attempts to obtain the registration (WKD100J) from the original Triton for the anniversary Triton have proved unsuccessful, as the DVLA claim they cannot re-issue numbers previously registered on another vehicle.

The Golden Anniversary also celebrates fifty years friendship with fellow VMCC NW member Joey Moore and NW branch Chairman Alex Graham (see Fig. 4). Indeed, it was Joey and Alex who had encouraged Gordon to build the first Triton in outbuildings on the farm Gordon and Brian lived in, in Fazakerley at the time.

Hopefully the project will be a rewarding one and exercise some of Gordon’s skills exhibited all those years ago. It certainly shouldn’t be beyond him. He previously built Velocette Venom from various contributions. This also involved the engine purchased from Freddy’s Motorcycles in Warrington (there’s a blast from the past) that he carried under his arm all the way home to Fazakerley on public transport.
This was followed by modifying a 31CSR with needle roller mounted and reprofiled cams, much lightened timing gears that were a thing of beauty, 14:1-pistons, gas flowed cylinder heads, polished and lightened rocker arms, etc. Whilst the bike was very rapid, unfortunately the cylinder head gaskets were not up to the job and constantly failed.
However, Gordon would love to hear if the CSR (39 PMA) is still in circulation.
In the meantime, Gordon is looking forward to rekindling his love of all things Classic Bike and mingling with the VMCC community.